His pictures make you want to pack your bags and head to the sea. It’s not only inspiring but also amazing how Duncan Heuer, the Australian under water diver is trying his best to bring glimpses of astonishing life under water and thus raise awareness! Read on for a visual treat of some great shots and know about them. 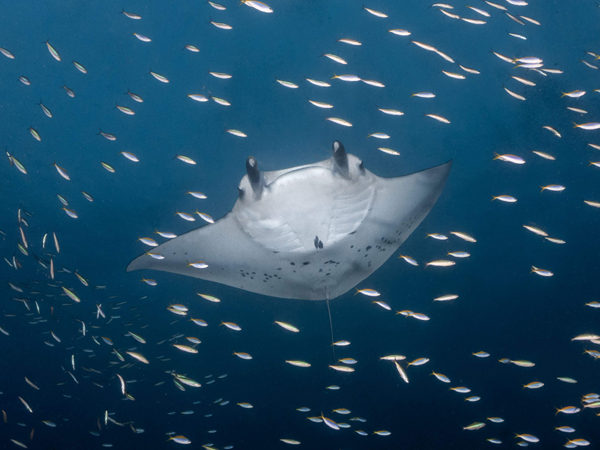 1) Manta ray seen in Maldives in April on a trip with Dive Respect Protect. The Maldives are a gathering point for about 5000 manta rays. They get both reef and oceanic mantas passing through and are often seen on “cleaning stations” where little cleaner fish peck parasites off them. 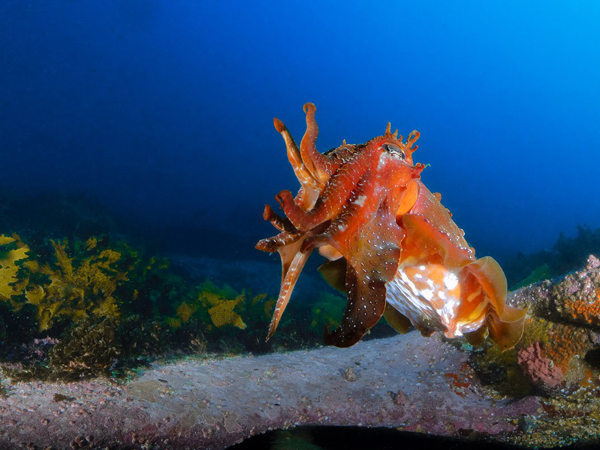 2) Giant cuttlefish seen in Sydney. We get the largest cuttlefish species in the world in Australia. They are very smart animals and probably have the highest intelligence of any invertebrate species that we know about. 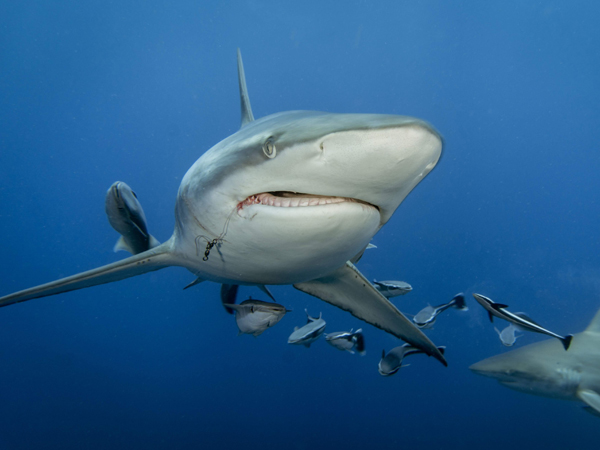 3) Oceanic black tip shark with fishing line caught in its mouth. This image was taken in South Africa in a place called Aliwal Shoal. When we arrived on the reef the sharks heard the boat engine and started circled the boat. They associate boats with food because when people are reeling in fish, it is easier for them to grab the fish.

4) Beautiful reef scene in Komodo National Park. This image was taken on my first trip with Dive Respect Protect. The reefs in Komodo are really healthy because they lie between two oceans and they get strong currents ripping through them bringing nutrients and keeping the water cooler so that coral bleaching occurs less. We dived with Wunderpus who is owned by a group of people who invest heavily in conservation issues facing the reef. They have put their own mooring lines in the park which stop boats anchoring on the reefs. 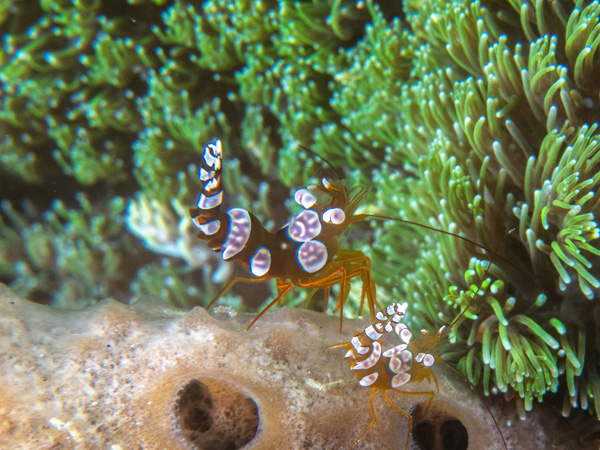 5) Thor amboinensis is a small shrimp growing to a length of about 13mm, also called a “sexy shrimp” or “squat shrimp” because its tail often fans out above its head. 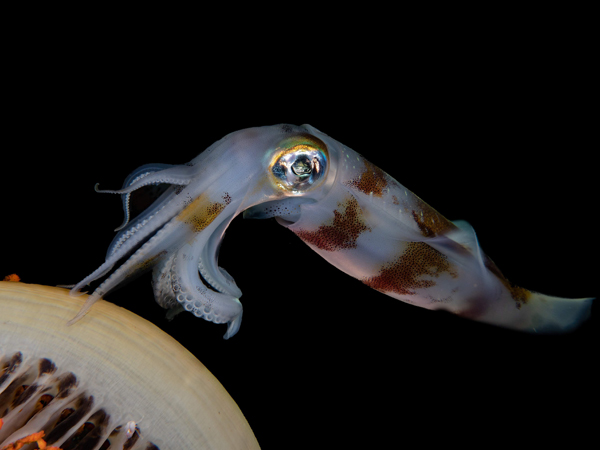 6) Squid – seen on a night dive in Komodo National Park. Squid often follow divers around at night, usually staying just out of sight behind them and using the lights to hunt for smaller prey.

7) Anemone clown fish family photographed in Sibuan Island in Malaysia. The females are the dominant ones in this relationship and the male works to keep the anemone clean and tidy so she can lay her eggs.

8) Green turtle in Sipadan – Borneo. Notice how the green turtle has one claw on its front fins. That is one way to tell it apart from a loggerhead (they have two claws) which could otherwise look quite similar from underneath. 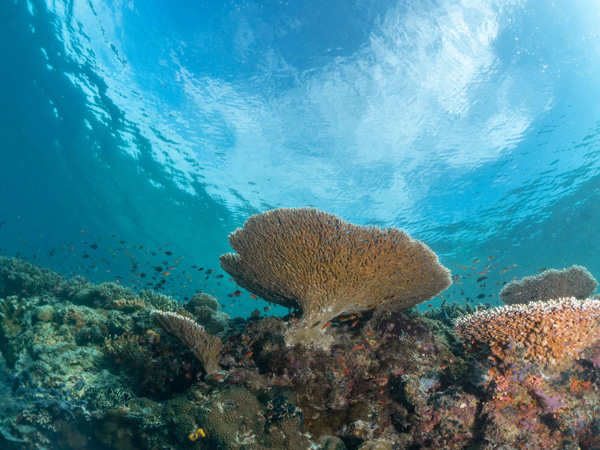 9) Sipadan has been protected for over a decade. It used to allow guests to stay on the island. Now that is no longer on option and it is a small military base. They issue 120 permits per day for divers to visit. It is a stunning island where outstanding diversity, you could pretty much encounter any creature (big or small) on any dive.

10) Moray eel on the house reef in Mabul. Mabul Island is the gate way to Sipadan. It has a number of beautiful house reefs and it is a macro diver’s paradise.

11)This eagle ray swam past me on our last dive in Maldives. They are normally timid rays and they don’t often get too close. This one swam with us for a minute or two 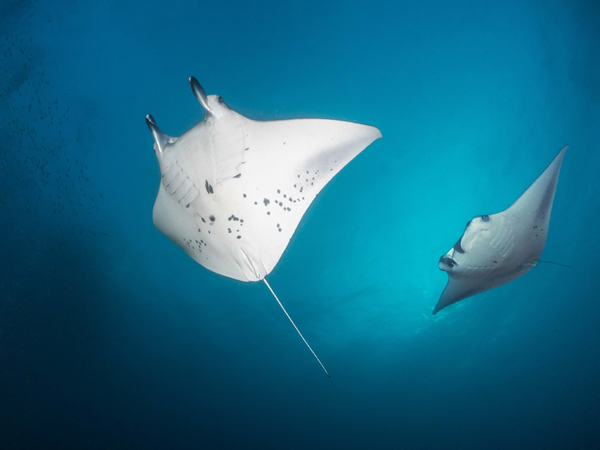 12) Two manta rays seen in Maldives in April on a trip with Dive Respect Protect. DRP specialises in bucket list diving holidays but with a twist. Along the way they educate guests on the conservation issues facing the region and make sure that you go with an operator that is giving back to the community. 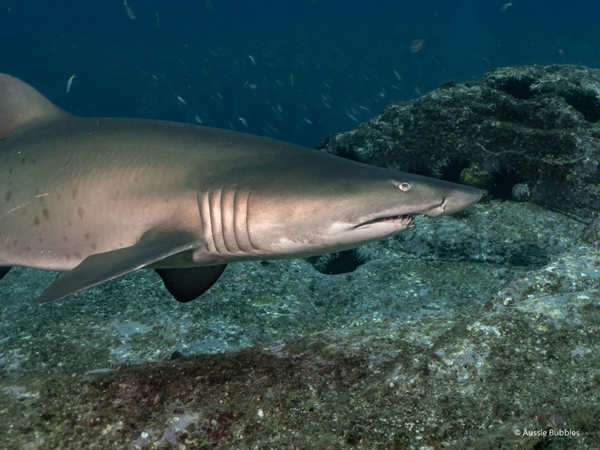 13) Grey nurse shark in Australia. This species became the first protected shark in the world when the New South Wales Government declared it a protected species in 1984.

14) Manta ray in Indonesia. In 2014 Indonesia declared manta rays protected in all its territorial waters. According to one study a manta ray can bring in up to $1m in tourism over its lifetime but it only worth up to $500 if caught and killed. The Indonesian government realised that it may no sense to only protect part of its reefs, because the manta ray roam large distances. 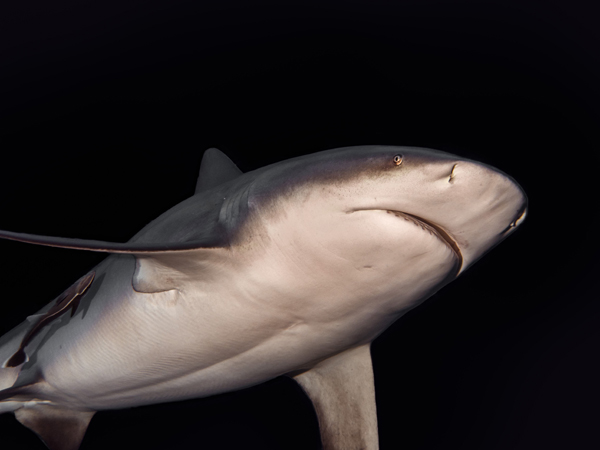 15) Bull shark photographed in Fiji. Bull sharks are one of the top three most dangerous shark statistically but in reality are just like other sharks. They are wary of us, we are not on their menu and they tend to be a mix of shy and sometimes curious but will move on quickly if they feel threatened.

Enjoyed what you saw? Let us know through your comments!

Duncan with his partner Charlie Elliott

Duncan Heuer works as for THE ICONIC, Australia’s most recognised online fashion retail company. In addition, his underwater photography pursuits have led to some exciting projects that includes promoting and producing content for Dive Respect Protect that specialises in organising live-aboard dive trips to bucket list destinations around the world. Their mission is to educate guests during these trip on environmental pressures facing the regions they visit. They also partner with eco-conscious tour operators who are giving back to local communities and contributing positively to conservation initiatives. Duncan has also been involved in promoting local underwater photography events, film festivals and contributing content to documentaries, news articles and conservation groups. What drives him is the desire to showcase a world that few get to experience but whose actions and choices now threaten its survival. And Duncan feels himself to be lucky to have a partner who is equally talented and totally obsessed with diving. They continually push, encourage and support each other!

You can know more about him and his work through-
https://www.instagram.com/aussie_bubbles/
https://www.aussiebubbles.com.au/

Some fish come out to greet you