This year the Centre celebrates the 16th edition of the annual festival The IIC Experience: A Festival of the Arts from 11th to 15th October 2019.

Conceptualised to bring together a wide array of talents in the visual and performing arts, the festival epitomizes and encapsulates five decades of the Centre as a space for diversity, freedom, innovation, creativity, learning and entertainment. The range of activities – dance, music (Indian, Western classical and jazz), theatre, folk art, paintings, installations and photography exhibitions will take place using both outdoor and indoor spaces of the Centre. Cuisine is also an important and integral part of the The IIC Experience. 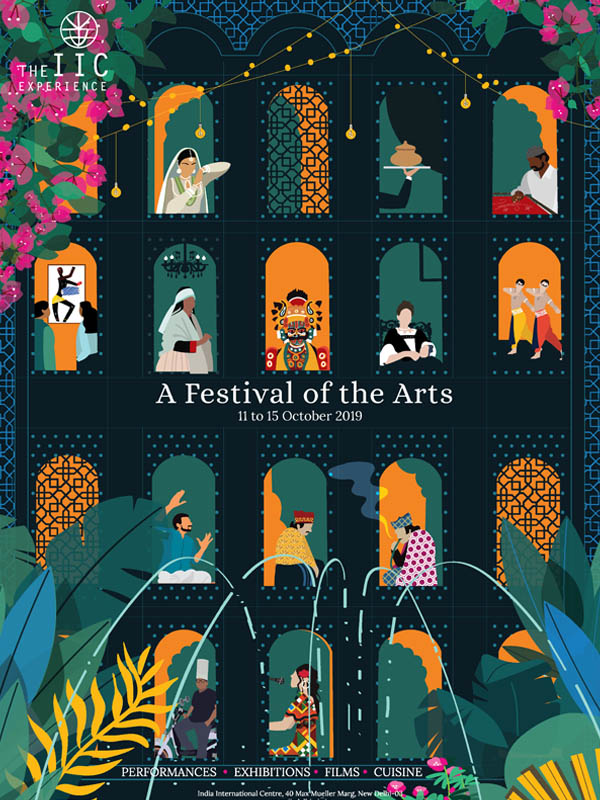 The IIC Experience will be inaugurated by Shri N.N. Vohra, President, IIC on Friday, 11th October 2019 at 6:30 pm in the Fountain Lawns. The inaugural performance Magic in Movement – brings together a unique and unusual Odissi recital choreographed by Guru Bichitrananda Swain and presented by an all male troupe of artists from Rudrakshya Foundation, Bhubaneswar. Other performances include From Bossa Nova to Samba by Sabor do Brasil; Shabd Leelam presents letters, poetry and drama by Surnai Theatre and Folk Arts Foundation led by Ila Arun, well-known actor, singer and theatre personality. The festival closes on 15th October with a Carnatic Concert by T.M. Krishna. After a very long hiatus, the Centre presents the unique musical dance theatre of Karnataka – Yakshagana by artists of Hanumagiri Meyla, Karnataka on 13 October at 6:30 pm who will present Padmavati.

This year, the festival includes a special focus on Lucknow’s rich, syncretic culture, past and present with Awadh se Chand Warq which includes two exhibitions- a display of photographs, artifacts, archival textiles, books and letters celebrating the diversity of people, places and the material cultures of Lucknow; and Husn-e Karigari-e Awadh on the craft traditions of Awadh with live demonstrations by master artisans. There will also be a performance of Soz Khwani or Songs of Lament; and Awadhi Bawarchikhana an Awadhi Dinner prepared by Naimat Khana, Lucknow.

The exhibition in the Art Gallery, Contextualising Progressive, Indian Art from the 20th Century curated by Vijay Kowshik and Gogi Saroj Pal will re-focus on the work of some of the leaders of the Bombay Progressive Group and examine their legacies in the creation of a new idiom for modern Indian art today. The exhibition will also look at the work of the early Bengal Masters and other leading artists that followed.

The IIC Quarterly will be released during the festival by the President, Shri N.N. Vohra. October 2020 will conclude the two-year celebration of Mahatma Gandhi’s 150th birth anniversary and the Autumn issue includes a section of on Gandhi, which demonstrate both the complexity and relevance of his thought for our times. The rise of Wahhabism in India; religion vs faith in a political framework; long forgotten Indian soldiers who fought in the First World War; politics and cinema; psychological profiles of terrorists; a nuanced black and white photo essay on the ship breakers of Darukhana are some of the other articles in this issue.

In films, two festivals will be presented – Filmi Duniya Mein Awadh a festival of Indian films based on or set in the city of Lucknow; and Magic at the Movies: A Selection of World Cinema 2017-18 presents 11 award-winning international feature films from around the world.

The food festival includes, Kannadiga Oota, a special Kannadiga lunch presenting food typical to North and coastal Karnataka; and the subtle Flavours of an Odia Bhoji. Chefs of the Embassy of Brazil return with the festival favourite, Flavours of Brazil; while Chef Anumitra Ghose Dastidar will present her own unique take with Esho bosho ahare – A Bengali Repast; the food festival concludes with An Italian Cena.

Inside the mind of Davide Cerati