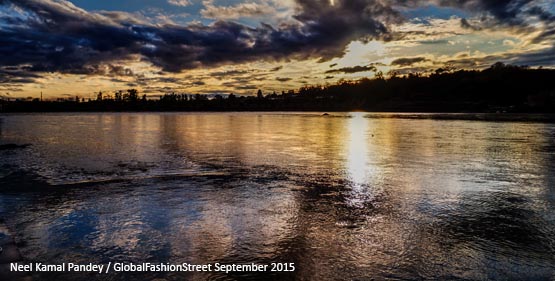 The legend has it that a sage named Raibhya Rishi practiced meditation on the back of River Ganges. Lord Vishnu, happy with the devotion of the sage, appeared as lord Hrishikesh and thus Rishikesh came into being. Rishikesh shot to fame came when the Beatles visited Maharishi Mahesh Yogi’s ashram. It is now the Yoga capital of the world. Residing in the heart of Shivalik Mountain range, Rishikesh is a four hour drive from national capital and an hour’s drive from Haridwar.

Moving in a motor boat to cross the river Ganges, the sun said goodbye with an orange hue. Several leaf bowls floated by in the milky water, reflecting the wishes of the devotees. Meanwhile, a sadhu struggled to untie the knot in his matted hair, while the cows continued caressing their young calves. In the backdrop Ram Jhula suspended in the air going to and fro without a care in the world, for me this was a welcome to the divine land.

On the banks of Ganges, Rishikesh presents itself with Hinduism’s most celebrated dedication to the waters of the river. The Ganga Aarti, on Parmarth Niketan Ghat, is also called the happy hour of Rishikesh. Hundreds of devotees surround the ghat holding camphor flames in their hands thanking the Ganges for the richness it brings to their lives. Swami Chidanand, whenever he is in town, starts the Aarti by offering ghee in the Hawan Kund i.e. sacrificial fire and the young followers draped in saffron clothes start chanting the hymns. Where on one hand the fire plays a whirlpool, smoke from the incense sticks mystifies the setting, cymbals clamoured and conches enthrall everyone present in that moment. 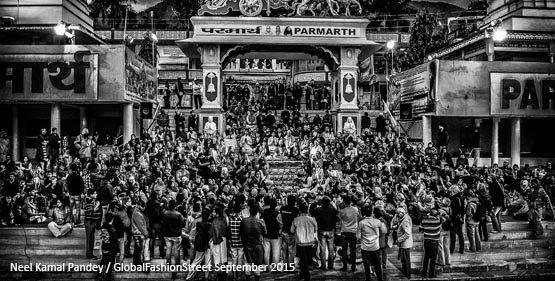 Rishikesh has many attractions apart from being the holy destination and the yoga capital. River rafting is a major attraction of this city. Adventure enthusiasts love the thrill of rafting that the waters of Ganga offer all the year round. Ram Jhula, a suspended bridge, serves as a connection to the two banks of the river. Dedicated to the younger brother of Lord Ram, Lakshman Jhula is also a major tourist attraction. The Ganga beach is also a major crowd puller with the grey cold sand caressing the feet. Bon fire in Ganga beach is a regular affair in rishikesh. Parmath Niketan, an ashram established by Swami Chidanand, is a beautiful place to stay. The ashram is surrounded by the Himalayas and in front of it is the river Ganga flowing in full flow.

Rishikesh is the perfect destination for a short getaway far from the maddening crowd.

If you are looking for balance in life, this is your ultimate answer