The story of Giovanni Versace every fashionista must know 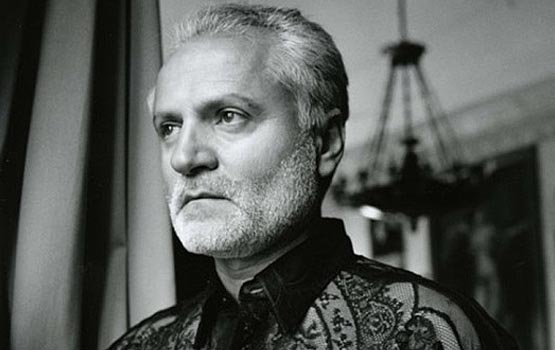 Is about the sexy young spirit of life that says I am here to stay but there’s a long story, many emotions and a lot of people behind the label that says, Versace. On his birth anniversary, I salute this spirit so fashionably ahead of his times with a fringe memoir of his life’s story. Happy Birthday to Giovanni Versace or more popularly known as Gianni!

It is very difficult to put in a few words, the story of a legend. Gianni Versace, the man behind the iconic label Versace, was a futurist. And it is to fearless designers like him that we owe a large part of bold modern fashion today. Certainly, he created a label that was a shout out to all subtle designers. As a matter of fact, his garments were classy yet sexy and revealing at the same time. With bold colors, cuts and prints, Gianni created a brand which over the years evolved to become one of the most glamorous labels. If anything, Versace was not for the weak hearted. 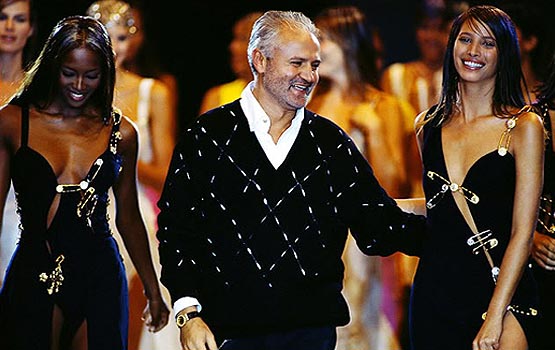 So who was Giovanni Versace?

And what were his idiosyncrasies which make him so popular to remember even 20 years after his death? A designer, an artist, a performer or a maverick who could simply weave magic into everything that he created!

Born in Reggio Calabria, Italy on 2nd December 1947 as Giovanni Maria Versace, his initial years were much influenced with dressmaking as his mother Francesca, was a dressmaker. Another key point is his education. He studied Greek and Architecture, the two strongly influential aspects that reflect in his logo and his designs. Gianni was talented and creativity brimmed within him when it came to designing. Versace was very fond of arts, as well. 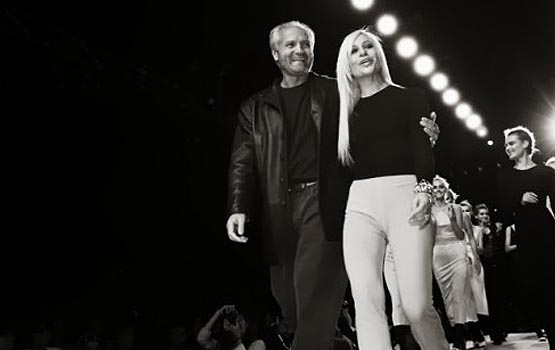 Donatella, his kid sister takes a bow with him after a show Picture Source

His stint with fashion designing

Started around the age of 25 when he moved to Milan. Gianni started his design career working for a successful label called Genny. In truth, his designs were an instant hit and motivated him to start his own line. Finally, Gianni launched his signature collection for women at the Palazzo Della Permanente Art Museum of Milan in 1977. This was followed by another Menswear collection later in the same year.

The kind of designs Gianni was presenting were stylish, chic and extraordinarily different. Subsequently, inspiring him to start his own boutique which eventually happened in 1978. Gianni Versace’s first atelier was in Milan’s Via Della Spiga. The label never looked back, thereafter. 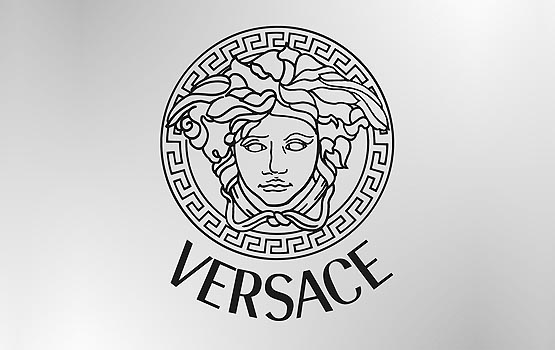 Gianni’s designs were complimented by his success graph and soon he was mixing up with models, celebrities and artists. Additionally, he also started designing costumes for movies. Elton John, Bon Jovi, and many other superstars started wearing his designs around 1980, and still continue to do so.

Versace was bold about everything.

Versace was one of the few iconic celebrities who did not shy away from declaring their sex preference. Evidently, he was a gay and he met his boyfriend, a model then, Antonio D’Amico in 1982. Antonio was almost thirteen years younger to him and later became his partner. Also, Gianni put up D’Amico as a design head for his extended label Versus Sport from the House of Versace. The two went along well and D’Amico was with Versace till his assassination in 1997. Up to the present time, the mystery remains unsolved. Andrew Cunanan a serial killer, shot himself with the same gun eight days after he killed Gianni. He shot Gianni outside his Miami Beach house when he was returning from his morning walk.

Gianni was a loving family man.

His family included his elder brother Santo and younger sister Donatella, on whom particularly, Gianni doted. Versace was known for doting upon his nieces and nephews too. Santo’s children, Francesca and Antonio, and Donatella’s children, Allegra and Daniel, all are an active part of the label Versace. Gianni also included D’Amico in his will along with his family. Although D’Amico he did not get much considering the tension that he felt with Gianni’s family, he survived. However, he did receive a fraction of presumed pension and restricted right to live in Gianni’s properties.

Today, the label Versace is run by Donatella, a fashionista herself who has been successfully able to carry on the design sense of Gianni and scaled newer heights for the label. Donatella sold the company to label Michael Kors in 2018 but continues to be its chief creative officer. Versace, as a brand today, is something to reckon with. So here goes, Happy Birthday to Giovanni Versace!