Hope is a good word. And China is not a bad country, after all. To know why, you must see The Martian. As for now we bring you the movie review.

The Martian, Directed by Ridley Scott, a 3D movie starring Matt Damon, Jeff Daniels and others, is the latest to hit screens this October 2nd 2015 in the country. The movie, an adaptation of writer Andy Weir’s 2011 novel by the same name, The Martian, is a good take on fighting the odds. Set in the year 2030, the story gets your adrenaline rushing every few frames. It’s like watching someone else take a roller coaster ride. It looks interesting, you know you are not there and you can still feel it!

The movie is a science fiction not very far off to hit the reality. During a manned mission to Mars, one of the crew is left behind. It’s the story of his survival and the different takes that people have when it comes to choices in life. Although, watching someone surviving on a lone planet does raise some scary thoughts, it’s the zest that Mark Watney, played by Matt Damon, shows, that leaves you impressed. The story has some very interesting perspectives, from every angle; in fact, the rescue mission is gripping indeed. 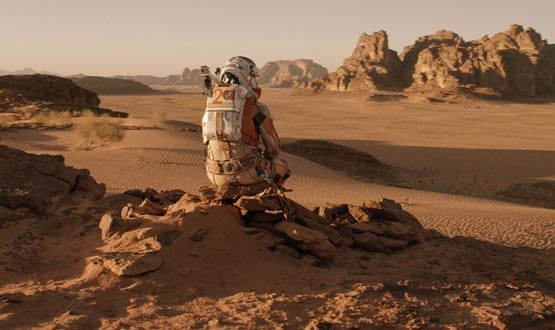 At some points, the movie is predictable but the dialogues will definitely give you good pleasure. There are some really good frames like the scenic beauty of Mars, its horizons and some shots of space. What’s not interesting is the Directors’ approach to the overuse of the toy car depicting Mark Watney’s Rover on the Martian surface. What I mean is, the old trick does give away at many points, how the scene was shot.

Personally, I loved the disco collection that Captain Melissa Lewis (played by Jessica Chastain) leaves behind. It was nostalgia listening to those old eighties disco hits, a special mention to Donna Summer’s ‘I need some hot stuff baby tonight,’ which I truly enjoyed.