Indian web series are pulling their weight as they compete with their western counterparts. From Netflix to Zee5, Amazon Prime, and many more, there is something for everyone. Contributed by Muskan Sharma.

With the flurry of shows that have been coming out, there are some for the trendy and stylish thinkers as well. With gorgeous clothes, beautiful accessories, and a display of fashion-conscious men and women, we want it all. So, let’s bask in the beauty of the beautiful designer dresses, branded shoes, and Birkin bags all glamorized in the latest stylish Indian Web Series catching Viewers Attention. So, here’s a list of Top 5 Most Stylish Web Series to Watch. 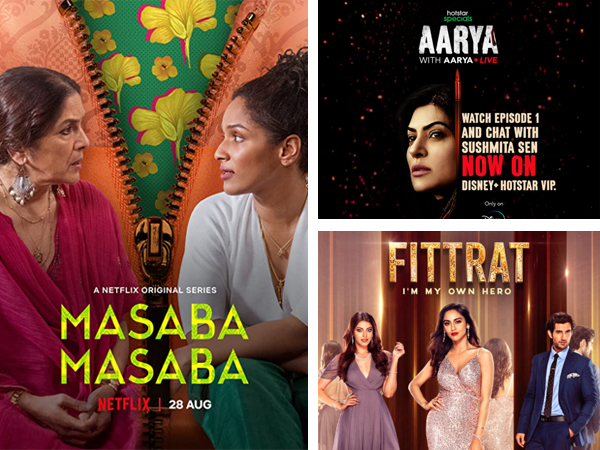 If you want to watch a show about fashion, related to fashion and involving fashionable people then the latest Netflix drama Masaba Masaba is the best Indian Web Series for you. Starring none other than Masaba Gupta and Neena Gupta, this series trials the work and life of the designer. The series is a take on the ups and downs Masaba faces throughout her designing career. And it also shows the comic side of her relationship with her mother and the men that come into her life. While Neena Gupta and Masaba play fictional versions of themselves, their clothes and dressing style are very real. With beautiful dresses from Masaba’s real collection and accessories to die for, this Indian web series is every fashion novices’ holy grail.

Another great Indian web series based on the lives of 4 flawed women and their lives. One of the first of its kind with 4 women as the leads, the series is loosely based on the ‘Sex and the City’ concept. The Amazon Prime series shows each character’s personality through the types of clothes they wear. And naturally, as the characters evolve, so do their clothes. Also, designers like Rahul Mishra were pulled in to provide dresses and accessories. So can you say no to this fun series with high-end fashion?

How can anyone stop themselves from watching a series where Susmita Sen makes a comeback? Aarya is a web series that shows the power of a woman in a male-dominated world. With her husband’s pharmaceutical business being involved in the Heroin trade, and her husband being shot and taken into police custody, Aarya must now take over in his place. Will she be able to protect her family and keep the business running? Or will she also have to bow down to the men who keep trying to harm her? While the series is a strange take on women empowerment, it helps to show Sushmita Sen wielding a gun and shooting drug dealers, while wearing on-trend clothes and carrying the latest Birkins.

Mentalhood is another best Indian web series where women take the central roles. With Karishma Kapoor making a comeback with this series, it will no doubt have style and flair that most trend followers will want. The series revolves around the different types of mothers and their relationships with their husbands and children. With the task of achieving unreasonable expectations in family, work and personal lives – the 6 women of the series try to overcome their fears and worries to give their children the best. With the constant competition of trying to be perfect, will these supermoms win the race against the other moms? Or will they create beautifully fashionable bonds that will stand the test of time?

This controversial web series is another that offers fashion followers a glimpse into the world of trends. Tarini Bisht is a gold-digger and she is on the lookout for a sugar daddy. To fulfill her dream of being rich, she moves from Dehradun to Delhi to stay with her rich BFF, Amy. Unfortunately for Tarini, Amy’s fiance starts obsessing about her and wanting to make her his. What happens when the self processed gold-digger falls in love with her BFF’s fiance? With expensive cars, designer clothes, branded shoes, and over-the-top mansions, this series is perfect for viewers who want a peek at the glam life. Watch Tarini’s transformation from a small-town girl to a big town diva with the style and trends of this decade.

Conclusion
Beauty may lie in the eyes of the beholder. But fashion and style is something that no one can stop. These top 5 stylish Indian web series show that fashion and style are a major part of describing a character and their role in the series. With changes in clothes, the makers of web series try to portray the change that their characters are going through. This change may be good or bad. But it is still a change.