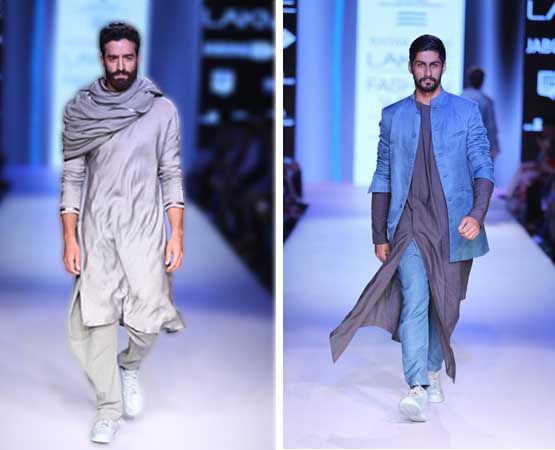 Fashion Design Council of India (FDCI) has announced three young designers, who will showcase their collections for the first time, in a specially curated menswear show. This will be new start at the Amazon India Fashion Week Autumn-Winter 2016 in association with Maybelline New York. Antar-Agni by Ujjawal Dubey, Divyam Mehta and Rohit Kamra and will present their designs on the fourth day (19th March) of the AIFW AW16 at 2pm, at the Jawaharlal Nehru Stadium, Lodhi Road.

Each designer will interpret themes in his own unique way. Antar Agni’s Autumn-Winter collection titled “The Red in Us”, explores the varied emotions that red exudes. Red is extreme, a stimulator, heavy, intense and a stirrer. The collection aims at the controlled use of oxidised red as an extreme element, paired with fabrics with character, acting as a vent for the persistent human neutral state.

“Into the Woods”, a collection by Divyam Mehta, draws inspiration from trees and textures bringing out a feeling of freedom, intensity and blissfulness, harmoniously blending into laboriously executed Shibori patterns.

Interestingly, Rohit Kamra’s collection will redefine the royal look by modernizing it through sharply tailored bandhgalas and breeches. “Made in Jaypore” will see a huge Jaypore influence seeping into the ensembles.

Sunil Sethi, President, FDCI said, “The three hand-picked designers showcasing a menswear collection at the upcoming Amazon India Fashion Week Autumn-Winter 2016 will add undiluted pizzazz to the event. This is a first for us, as we felt it will give a 3D experience to the viewers. The shortlisted male models will also get an opportunity to debut on the AIFWAW’16ramp through this valuable addition.”