Bringing you the latest collection for an exclusive peekaboo

Stefano and team had great fun doing the summer campaign at the Acapulco beach in Mexico. Bringing you the whole idea of putting a successful campaign and the story behind the shoot, in the words of the maverick photographer himself!

The concept we used behind the campaign was to use a tropical background, to express the Spring/Summer campaign to its Maximum expression, we had everything over there to use in our favor – the sea, white sand, and a hotel resort to pull it over!’ elates Stefano.

The whole experience of doing the shooting was amazing. Since the moment we arrived, all the staff, models, and marketing directors were very excited. Shot after shot, everyone in the team got more anxious about the upcoming result.

Aldo Conti is known in Mexico and in Guatemala for being a trendsetter in fashion garment brand for men especially for Suits. They have over 160 stores all across Mexico and Guatemala, targeting an audience of middle-high class range.

The entire Spring/Summer ’17 collection is in cotton and linen fabrics, inspired by four trending forecasts. The Jungle book: which is a trend inspired in colors such as orange and olive green, The Nautical Grunge: which mainly has white, sky blue, black and red and The Carny Kitsch: in colors such as yellow, orange and navy blue. 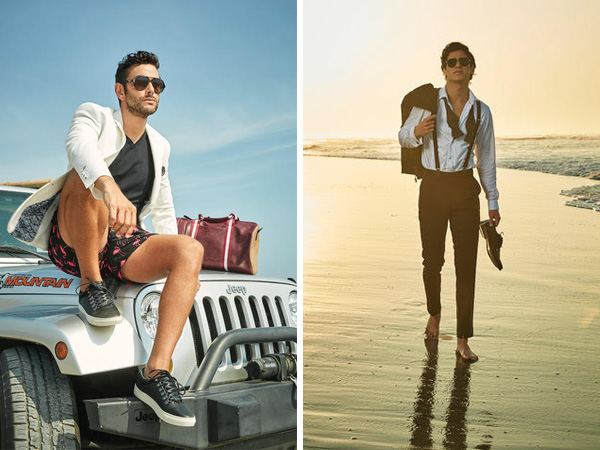 Aldo Conti offers suits for every taste, kind and occasion. The band is known for its fine suiting. The cut used in this collection is slim fit cut and skinny fit. Also the suits come in Italian cut which means it comes with two openings at the back of the jacket, and is styled to the body.

The styling and makeup was done by Stefano Raphael Staff, we used two makeup Stylist very well known by the fashion community in Mexico.

The models we used were selected through casting auditions, we held several weeks before the shooting. We managed to select 3 models among more than 50 candidates.

Fernando Consagra: This man has been our top model since 2008, and has appeared in every single campaign since then, also he´s quite famous in the Mexican model community.

Diego Otero: Diego has just arrived in Mexico to work in the modelling industry. He was a former footballer in Spain and he is starting to be quite known in Mexico.

The brand owns a factory apart from buying from China and India and many other countries around the world. The designers at Aldo Conti study the market and the fashion trends from the main fashion cities like Milan, Paris, London and New York and then create a style sheet for their own target audience.

The collection is up for sale in stores as well as their website www.aldoconti.com.