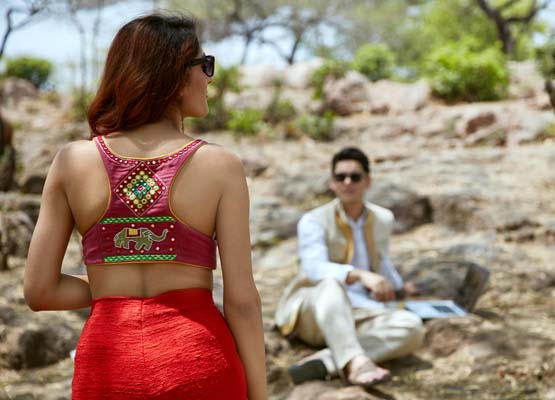 Three mavericks turned back the wheel of time and decided to bring back the long lost glory of what the world knew as real cotton and thus came back Reja on the ramp. The first stage of cotton yarn that comes from the loom directly from the hand-spun cotton thread without any chemical processing, organic and pure in its form is largely known as Reja in India.

Lalita Singh, Amit Parmar and Sandeep Mohar from Rohtak, Haryana, with their latest collection Reja-Nu, decided to bring back just that! We catch up with the trio to know the journey of this wonderful fabric right from being a cotton bud and on to the glorious runway!

The discovery of Reja

Reja is not documented anywhere in history but it dates back to hundreds of years as it’s a first piece of cloth we get after weave, the raw cotton. It’s a hand woven product mostly made on wooden khaddi (Loom). Geographically, Reja was in use mainly in Haryana, Punjab, Rajasthan & UP (W) but it’s not in a regular or day-to-day wear anymore for nearly hundred years as it has failed to counter the industrial revolution.

There was a time when this fabric was given so much importance that in some places, it used to be considered as a holy fabric. In fact, in Haryana, there was a tradition that a new born child was to be first wrapped in Reja and then made to wear other clothes.

Reja has a long history but no one has documented it ever. However, there are a few people like Dr. Ramphal Chahal, Mr Raghuvendra Malik & Dr Suman Dalal who are making an effort to revive this fabric and have collected history related to it.

Lalita & Amit had been working together since 2010 and were already established. As a part of their design work they used to visit State Institute of Designing Rohtak for seminars, as Jury members or as guest faculty. During one such visit, they met Sandeep Mohar, who is a faculty with the Institute. Lalita & Amit were already planning to work on Reja & were looking forward to revive it. They discussed the same with Sandeep to seek some information and came to know that Sandeep is also on the same path. Thus fate got them together and the three decided to work on it to launch a collection based on this fabric. 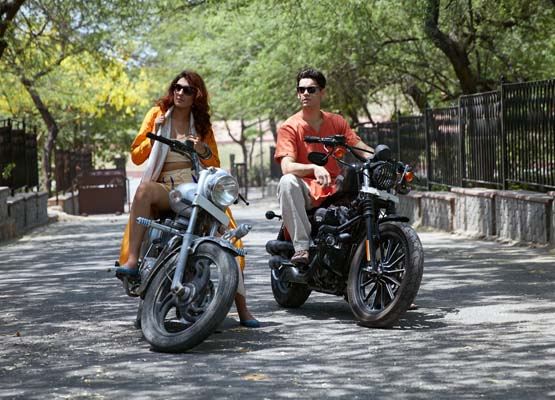 The Design Ideology Behind Reja-Nu

The ideology was to revive this fabric and its lost glory to make users aware that even after 100 years of exile it’s still wearable and can compete with any modern fabric. The idea was to show that this fabric can be used for ethnic and western outfit and it can still create that effect which linen, georgette or cotton can do. To give a little traditional touch we used Haryanvi wall paintings and traditional paintings done during various festivals in Haryana for the embroidery.

It was Saurabh Tyagi who helped in maintaining the quality control. His knowledge of stitched fabric came useful for the final collection. Another friend Manish Solanki’s design sense came in handy to bring out the contemporary designs and Niharika Singh pitched in for organic dyes. Ravinder Nandal, Lalita’s husband, helped the team throughout the making of the collection with useful insight, considering his knowledge of the fabric, since his early childhood when he used to see the making of Reja at his home. 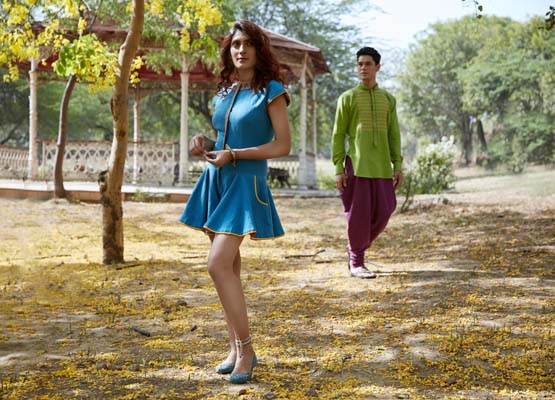 Apart from garments they created shoes as well, in the same fabric to prove its resilience and bring about its multi uses. This was also an effort to support Make in India movement initiated by Honourable PM of India. Last but not the least the pagdi worn by the showstoppers was a symbol of pride & dominance of women in Haryana.

The making of Daksh as a Designer label 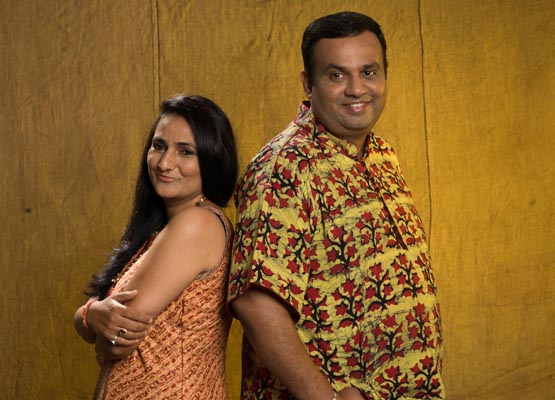 Daksh was founded in Oct 2007 by Lalita at Rohtak Haryana with an aim to create affordable designer wear and pursue her passion for designing. She met Amit in 2010, who was from Ahmadabad, Gujarat and they started designing and creating garments for their clients in India & Abroad. They made their first ramp appearance at the Bangalore fashion week in 2013 and also showcased at the same event in 2014.

Lalit, the true blue Haryanavi has a Bachelor’s Degree in Fashion and Mass Communication. After working in the media Industry as a Crime Reporter with one of the major leading dailies, she followed her passion for designing & clothing to launch her fashion label, Daksh. She is also associated with educational institutions through ‘Knowledge Sharing’ initiative of her label DAKSH.

Amit is has a Masters in Management and has worked extensively in the Retail & Banking Sectors. His passion for clothing and zest of doing something out of the box brought him in to the world of creating fashion along with Lalita. Amit also shares the same vision of knowledge sharing with Lalita.

Sandeep holds bachelors from NIFT and comes with an experience of six years. His forte lies in designing exclusively for men’s wear. Sandeep is fascinated by elements of designs and coverts his thoughts and imagination into the garments that he creates.

One thought on “Daksh Reviving Reja”