Art, they say, is one of the most powerful mediums. And that’s exactly what this Collective based in India believes in. Using art as a tool, they have started conversations around violence against women as well as extended discrimination. The Collective is called ‘Hers is Ours’. And this is their story that will leave you pondering over many facets of life for women. Hers is Ours Collective for Women Empowerment.

Understanding the fact that gender discrimination does not operate in isolation, the collective has been inclusive. Intersectional discriminations like caste, class, religion are also a part of their narrative. 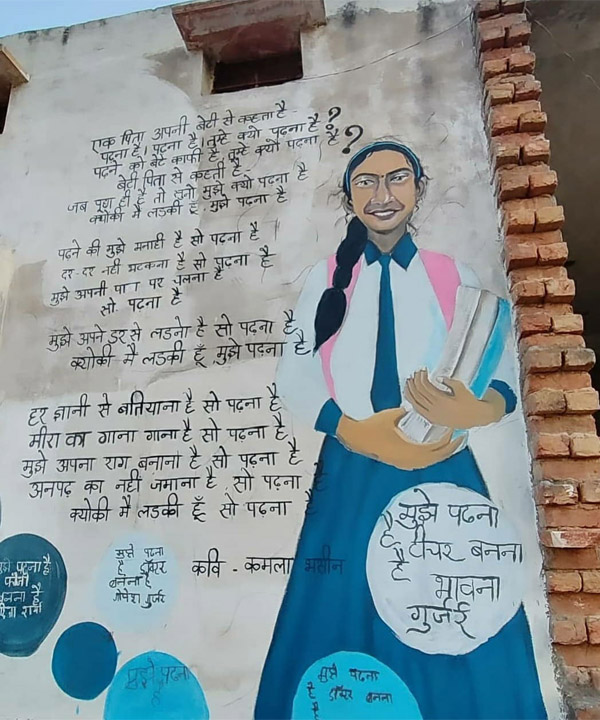 Deconstruct stereotypes and use art as a medium to do so

Together, the team has managed to do something incredible. They focus on the sections of the society that have been neglected by the society, yet are most oppressed. The team leaders believe that art in all its forms can be used as a conversation starter. They want to use art to spread awareness and give women a safe space to talk.

Where the East meets the West

We live in an India of paradox. One India is rich in its heritage, culture and economy. The other India consists of people who are deprived of the basic amenities in life and lack social support. They are far away from the glamor of metro cities of India. That being said, India is not the only country with such stark differences. It is this understanding that the HIO Collective is also trying to address. The collective wants to highlight how similar the struggles are, instead of highlighting the class struggle. Their work is a cumulation of International and intersectional feminism. 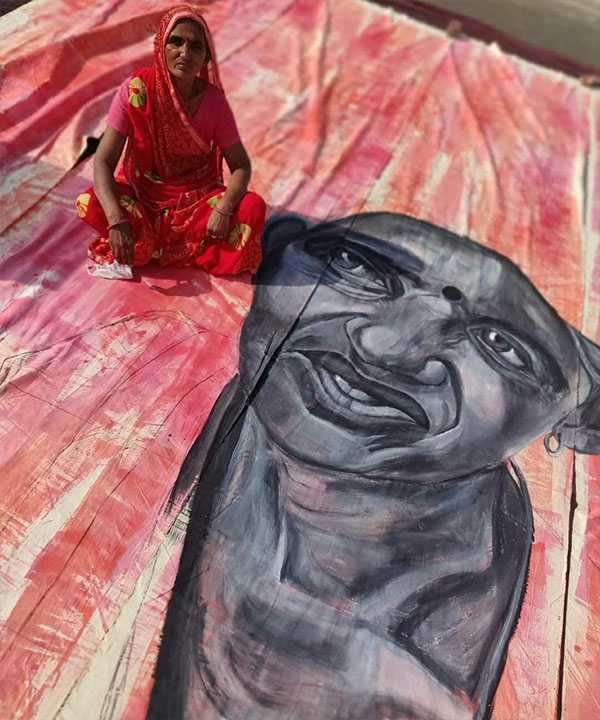 This is a 20X4 feet mural made by Girija Harihara on a canvas cloth with pigments, strainers, acrylic and wall paints, Installed with two pieces of 20 feet bamboo, like a scroll. Art Installation, Jaipur.

This is a poem written by Girija that takes the thought forward.
Dear Kamla
Do you know
The cloth you work with
That you so


Diligently block print
With your hands
And scan for mistakes
And fold
With your long bony hands
Becomes
Something else?
For someone?
The cloth becomes
A dupatta –
To hide breasts
From prying eyes
A table mat or runner –
Where women like you
Serve meals
And eat last.
A pillow cover –
Where your unspoken desires
Are never met.
I see you.
These very clothes
Now hang on a wall
Showing you, Kamla
In all your splendor
It holds your independence
It holds your dreams
For your children
It holds your respect
As a Pagri (turban)
On your head
You always cover
For others.
It can be uncomfortable at first
The weight of respect,
For someone so simple.
But don’t you see Kamla,
Like respect,
Your Pagri
Is also
Made for you
By you

The Collective recently concluded a bold two months tour to 18 cities. It was a travelling art & film festival that covered remote areas of Uttar Pradesh & Rajasthan. The festival saw participation of young, budding artists from all over the country. With a curated and inclusive list of artists, the team showcased paintings, movies, storytelling, musical and dance performances and other forms of visual art to begin a conversation about violence against women.

The choice of the word ‘Outsider’ was particularly interesting. It not only depicts them being the outsiders, but also hints at their audience. The audience belonging to the marginalized sections of society, the ones who are considered ‘outliers’. The audience included people from schedule castes, tribes, people living in urban slums, migrant labourer communities, rural farming communities, the Manganiyar community, sex-workers, (urban) LGBTQIA communities, and also upper-caste and upper class people. We all have been an outsider at some point in our life. Hence, the idea was also to discuss the stories of everyone involved in this experience.

‘Hers is Ours Collective for Women Empowerment’ has in many ways brought little changes, if not big. With the marginalized communities the Collective discussed the taboos that exist within their society such as menstruation, gender roles, caste and stereotypes that exclude them from the ‘mainstream society’. The essence was to bring films that talk about such issues and take their inputs. Movies included Jadui Machhi, Machher Jhol, Luka Chhupi, Something Like A War, Lata, Village Rockstar and many other were showcased.

Menstrual hygiene, menstrual awareness and conversations around it is often ignored in these settings. The collective also distributed sanitary napkins and pushed the conversation further to talk about taboos. Hers is Ours Collective for Women Empowerment has worked substantially in the last few months. 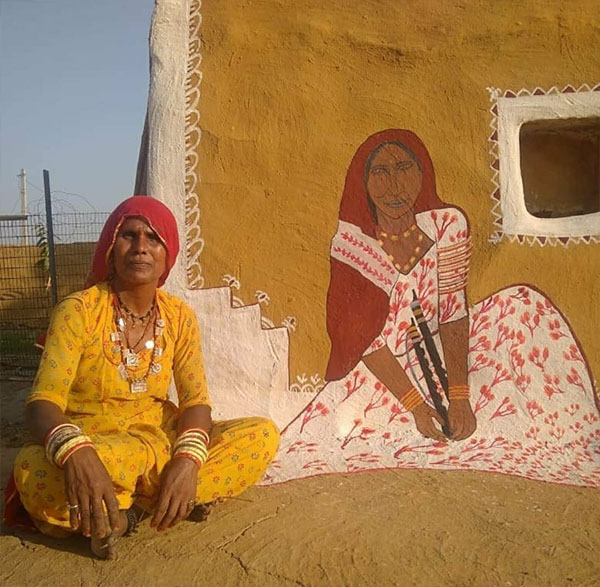 In patriarchal village where art and music are tightly in the clutches of men while the women spend their lives serving them, painting a woman holding an algoza, a traditional musical instrument felt nothing less than rebellion. While the men and boys of the village couldn’t wrap their heads around this never seen before image, the women and the girls immediately understood the meaning and displayed joy, if only for a few moments. In the hope to stir up the thought in young minds, the team left this image boldly painted on the walls of patriarchal rigidity.

One of the team members, Naomi believes that the festival helped in deconstructing their own prejudices. It gave them a raw look into the true experiences of these rural and oppressed women. Suggesting that this understanding should be taken to the urban/privileged setup for an insight to the struggles these women face.

Why the use of Art?

There is subtlety in art. But there is also power in art. The notions of femininity, marginalization and inclusion cannot be directly discussed with these communities. To challenge their years of thinking is not going to be easy. It needs continuous dialogue and no conflict. Local artivists, NGOs and communities need to take initiative. They need to weave narratives around these topics in a way that people listen and learn.

To say the least, the Collective has embarked on a noble mission. The mission to change the way people think and talk about violence against women, gender-discrimination, caste, religion and other social-issues. Already a trend setter, they have grabbed attention that just needs to be sustained for real transformation.

Enjoyed reading Hers is Ours: Using Art for Women Empowerment? Let us know. Leave us a message in the comments box.