India International Centre Presents a perspective exhibition of her artworks in an online exhibition on view till 12th July 2020.

This exhibition, A Nomad’s Journey- Travels with Premola, not only commemorates her first death anniversary but also is a humble effort to bring an insight to the art world of Premola Ghose. She was the Chief of Programme Division at IIC. The curious artist in her gathered the small and big experiences of people and culture during all her travels while connecting with locales, exploring bookstores and discovering cafes and lesser known sites along the way. 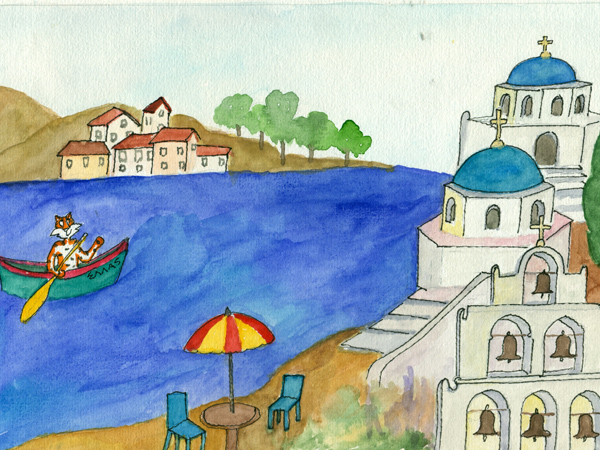 A wonderful storyteller, travel tales were always linked with vivid memories of food. Her paintings on display reflect a keen sense of observation for details, colour, texture and light.

The works on display include a careful selection of as many as thirty watercolor paintings created by her from 1996 to 2018 reflecting her travels. Most of the works on view have not been exhibited before.

In the words of well known writer and currently the Chief Editor of IIC Publications, Ira Pande: 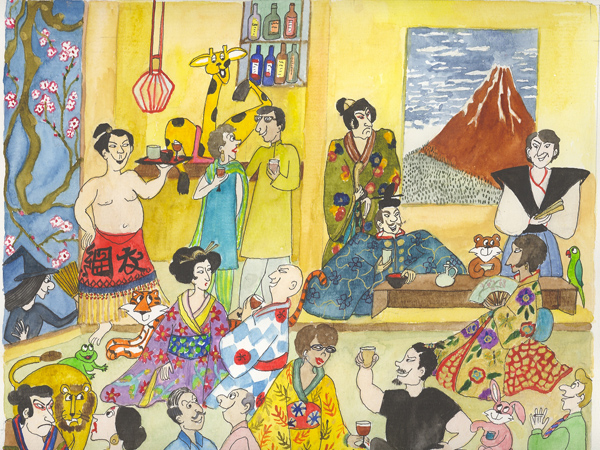 Premola Ghose (1953-2019) worked for over four decades at the India International Centre where she held the post of Chief, Programme Division. A gold medallist in MA (History) from University of Delhi, she lived history. A self-taught artist, illustrator and author, the central core of her paintings are a ‘gang’ of animals.

From the first time that Premola’s whimsical `gangsters’ were spotted as lively illustrations in a book, they brought along a wonderland that no other artist has quite been able to duplicate. Their bright presence lends a sense of innocent fun even to such solemn locales as the hallowed Church of the Holy Sepulchre and the Wailing Wall of Jerusalem or the India International Centre, Premola Ghose’s favourite hunting ground. 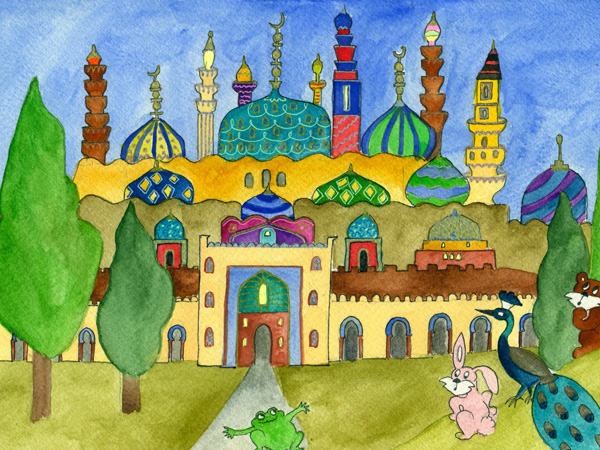 Like the well-beloved characters of a latter-day Panchatantra, Premola’s menagerie is composed of Puck-like creatures that say, `what fools these mortals be!’ as they peer into the human world. Placed in a variety of exotic locales from the Bosphorus to Iberia, they gently mock the ludicrous in human landscapes. As their bright gaze travels over terrible tyrants and murderous conquerors, languorous gin-drinkers in roadside cafes as well as lovable crackpots like Don Quixote, they are seldom overwhelmed by the grand historical pasts of classical European landscapes.

Although the eye of the viewer is first arrested by the playful compositions of these bright paintings, one is equally struck by the exquisite details of the floral borders, the complex geometric designs of the classic architecture woven in deftly: soaring domes, arches, spires and minarets of the Middle East and the blinding white of Greek houses against the deep blue of the surrounding sea. Premola’s brush strokes effortlessly spin these contrasts into her parables of modern times, which emerges from her deep interest in Mughal and Islamic art. She has an unerring sense of the vivid contrasts, a hallmark of both these traditions, just as her palette magically captures the sparkle of precious jewels. 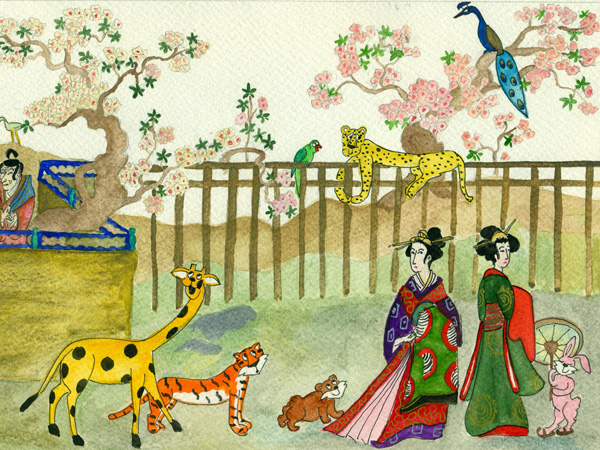 Above all, is Premola’s delightful sense of mischief: she is a natural caricaturist and several viewers will be amused to find familiar faces deftly disguised in what can only be described as a loving record of the many countries she travelled to and left behind for all of us to share and savour.

This exhibition A Nomad’s Journey- Travels with Premola is a tribute to her.