Time Frames-Merging the Lens and Canvas

Art Heritage continues its exploration of ‘constructed’ and ‘staged’ photography with the digital landscapes of Santosh Jain derived from lens- and non-lense-based images. 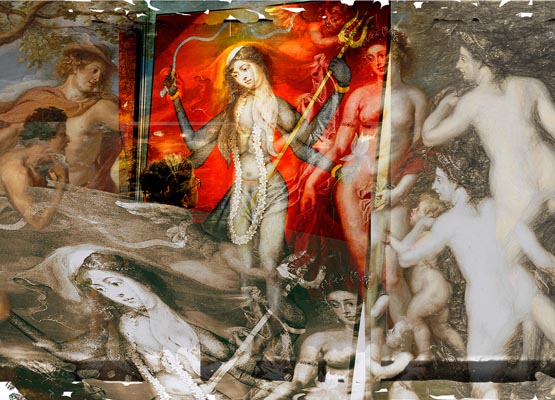 Though the use of digital technology in making art has been in use since its arrival, the convergence of the digital and the ‘real’ remains in a perplexing state as an art form.  Given the variability in what is considered digital art and the fact that several artists are self-taught, this artform is often overlooked, however the potential and possibilities within this genre demand further exploration.

Santosh Jain’s digital landscapes expand ones understanding of the mediums explored by contemporary artists today.  Stitching together images from different eras, cultures and ideological backgrounds leads to the creation of unique and often surprising juxtapositions in her strange, surreal landscapes that are hauntingly beautiful.

The marriage of images captured with her camera to those of iconic images by great painters through the use of digital technology result in a powerful effect, blurring the distinction between the real and the fantastical.  Through the meticulous placement of selected images her works re-imagine histories, reorient them, and subvert chronological dictums.

The resulting work is a dense, visual terrains where time and space remain fluid and suspended – thereby forcing the viewer to bear witness to an alternative version of history.  Embracing of the virtual world, while not abandoning the visual relics of the past, is surprisingly rare amongst her generation. 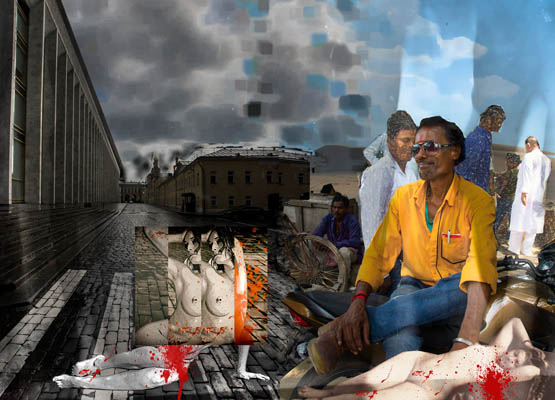 Jain’s artistic pursuits are led by her mature experience and interactions, rather than dictated by technological innovative possibilities. For Jain, technology is a means to create a landscape of sympathy and solidarity – one that opens up possibilities of using art to understand the complex narrative of our lives.

Born in 1949 Santosh Jain was trained as a fine artist (specialization print making) at the College of Art, Delhi.  Early in her career Santosh was awarded the Netherlands Government Fellowship by the Government of India that took her to Netherlands for two years where she explored glass etching and photo lithographs.  On her return to India she taught as a visiting lecturer at the Delhi College of Arts for 3 years.  Marriage and then bereavement kept her away from active participation in the art world for sometime.  She continued her passion for art and education by teaching fine arts at DPS Vasant Kunj (Head of Department) for 18 years.  After her retirement in 2012, Santosh found new life and energy and has been keenly exploring and experimenting with new mediums like digital photography and editing.  She has received many awards including from AIFACS Award (photography, 2013), AIFACS Award (digital art, 2015) and the prestigious Kala Shri Award from AIFACS in 1999.  She has held solo exhibitions in Paris, New Delhi and the Netherlands, and was recognized as an artist with exceptional talent by the Cultural Department of Netherlands, Holland.  Her most recent solo digital art show entitled ‘Amor Fati’ was held at Pioneer Gallery, New Delhi, in 2014.  Santosh Jain lives and works in New Delhi.