TALES OF THE GODDESS 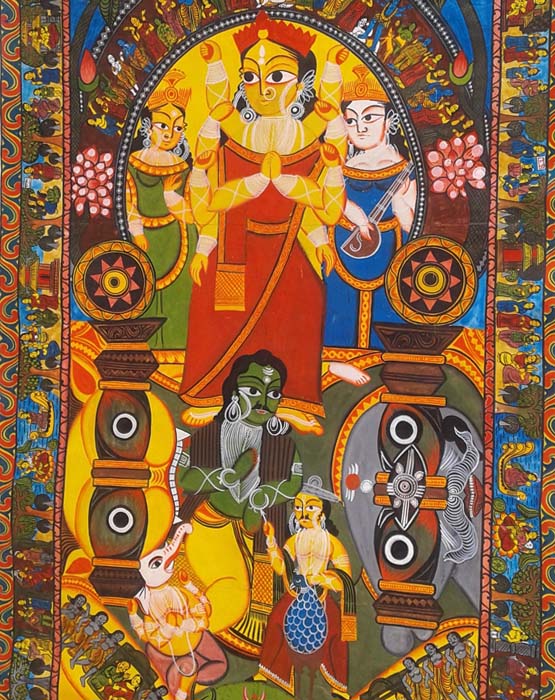 Bringing you a preview of collective works by Pata artist Sahajan Chitrakar, who is all set to showcase his exhibition of Patua paintings, at the India International Centre, New Delhi from June 8th-14th 2016. The artist will also be present at the gallery to demonstrate and narrate the stories depicted in the paintings on 7 June 2016 at 18:30, at IIC.

Sahajan Chitrakar is a born painter. With magic in his hands, he recreates colours into beautiful paintings of long lost tradition of Patua. Belonging to a family of traditional Patua or Pata painters, Sahajan Chitrakar was born in Naya, West Medinipur District of West Bengal and was initiated into the art form by his father, Bahar Chitrakar. Sahajan has been a practicing this art form since the age of 10 years. In recognition of his art, he received the 2nd Prize from West Medinipur Cottage Industries in 1990 and was also awarded first prize by the Ramakrishna Mission Institute of Culture in 2000.

Sahajan works on a range of subjects in his paintings and varies from stories taken from the Ramayana, Mahabharata, Puranas, local myths, fairy tales, folk tales, historical and folk legends to significant events such as 9/11, 26/11 and Tsunami, and to contemporary social and secular issues such as HIV/AIDS, women’s issues, dowry, Singur movement, Nandigram etc. Sahajan has also worked on the biographical stories of Rabindranath Tagore, Subhash Chandra Bose, Manasa Mangal, Satya Peer, Satya Narayana etc. 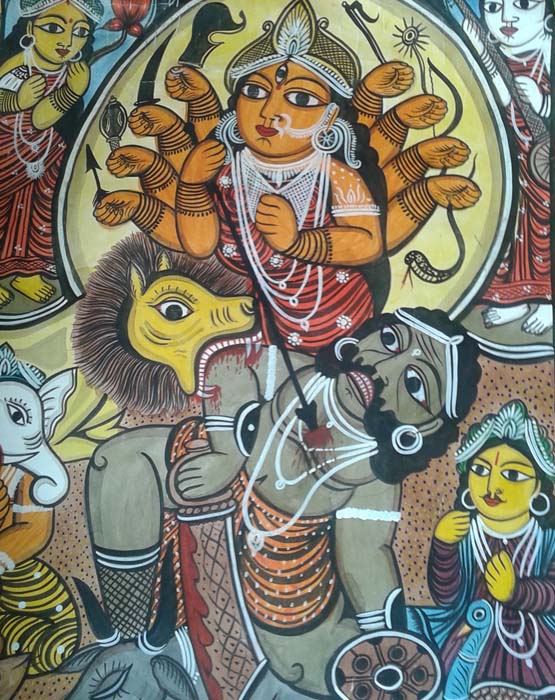 The traditional Patua paintings come from a community of nomadic artisans who have been practising the form since ages in the regions of West Bengal. The paintings are done on a scroll made out of paper or cloth depicting various mythology stories and the nature around.

The story in these paintings is either horizontal or vertically depicted and called as Jadano or Gutano Pata and the smaller squares are referred to as Chouko Pata. Interestingly, before the start of each Jadano pata, the artist selects a subject, around which then a song is composed. The entire story painting is a family affair with every member of the family pitching in to assist the master artist. The frames and length depends on the story. While selling the final piece each scroll is unrolled along with the song as a complete performance during which each character is introduced and the story thus told.

These paintings were sold in the local art fairs known as haat around the region along with a small show that comprised of pata songs that described the painting on the scroll. The art works were a hit due to their mythological reverence and the fineness of hand work.

Modernisation has heavily affected this community vis-à-vis their art form and Sahajan is working towards bringing it to the front. Having attended many a workshops and camps, he is ardently working towards reviving the dying art.