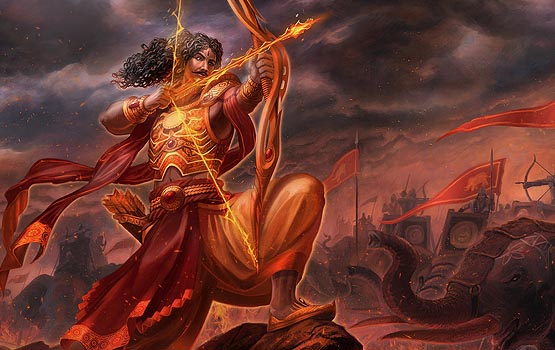 We all know about the hero of Mahabharata, ‘Karan,’ a legend but what most people do not know about Karan is what I shall share today. He was virtuous, intelligent, brave and a great warrior. He was the eldest son of Kunti but his entire life he had to struggle to stand for his honour. He was generous and also known as ‘Daan-Veer Karan’. Here, I reveal, some lesser known facts about Karan, the most captivating character of the legend of India.

1. Karan was the most attractive personality of Mahabharata but surprisingly, in his previous life, he was a demon named ‘Dambhodbhava’ or Sahastra-Kavach who got a boon from sun god to be protected by a thousand armour ‘Kavach’ and which could only be broken by someone who had performed a penance of a thousand years and whoever would break the armour would die immediately. He was killed by Nar and Narayan(Vishnu) 999 times and finally, after he took refuge with Surya, the sun-god, to be reborn as Karan.

2. Draupadi loved Karan. During the Pandava’s exile, Draupadi saw a fruit jambeel and plucked it for consumption but Krishna came and stopped her and told her that this fruit is for a sage who was meditating for 12 years, and would break his fast with it; not finding the fruit at its place could result in a disaster. When Draupadi asked for a solution, Krishna told her that the fruit could only be put back at its original place by someone who is pure at heart and holds no secret. Draupadi had only one secret, so, she walked up to the Pandavas and confessed her feelings for Karan. After which she was able to put the fruit back on the branch of the tree.

3. Karan was originally named Vasusena by his foster parents but because his foster mother’s name was Radha, he was popularly called Radhey, as well. 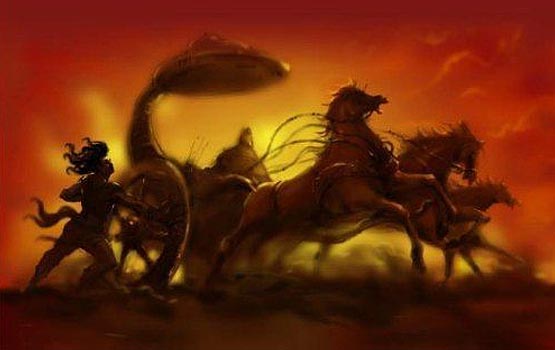 4. Karan’s bow was called Vijaya. It was created by Vishvakarma for Lord Shiva for killing Asur Tripurasura; Shiva gifted it to Indra, who later gifted it to Parasuram and Parasuram gave Vijaya to Karan. After Karan died, Vijaya went back to Parasuram.

5. Karan had Bhargavastra which nobody else possessed. The Bhargavastra, Vijaya and his Kavach along with Kundal made Karan one of the most powerful warriors in the Universe. He used Vijaya only once in Kurukshetra war. He was acknowledged as Duryodhan’s finest warrior.

6. His curse by his guru Parasuram on his last day at Gurukul was the result of his love for his guru. Parasuram had sworn only to teach Brahmins and not any Kshatriya but since Karan was not getting any guru to teach him he went to Parasuram and lied about his caste. On the fateful day, Parasuram fell asleep with his head on Karan’s lap and an insect bit Karan on his shin, when his guru was in deep sleep. Not wanting to disturb his guru’s rest, Karan went through the pain and the blood kept oozing out. When the blood had wet the garment enough for Parasuram to feel the wetness, he woke up to find what had happened. Instantly, Parasuram knew that a Brahmin child could never bear pain of such intensity, and he shunned away Karan for his own oath of not teaching any Kshatriya was broken because of Karan. And he cursed him that although he had cheated to learn the warfare but when he would most need it, he would forget everything.

7. Karan was the first person in attempting to kill jarasandh. He did this in Bhanumati Swayamvar. He started pulling Jarasand apart but Jarasand apologized and made Karan his friend.

8. Karan lost his first son Sudaman, who was 16 years old, in Draupadi’s Swayamvar. He lost his foster brother Shon in Virat war. Both were killed by Arjun.

9. The disrobing of Draupadi was instigated by Karan.

10. He was the most handsome man in the legend of Mahabharta.